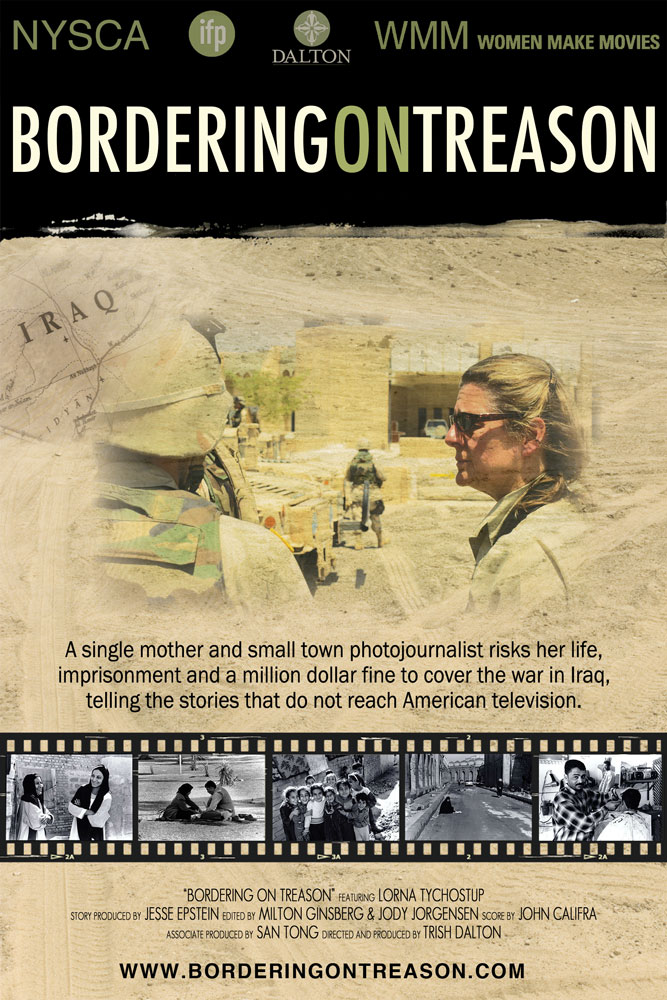 Bordering On Treason tells the amazing story of Lorna Tychostup, a single mother and photojournalist who travels to Iraq continuously for nine years to put a human face on a horrific global tragedy.

Visiting military units and Iraqi families beyond the green zone, she evolves from naïve civilian to established journalist. Through Lorna’s personal journey, Bordering On Treason explores the complexities of this war and the possibility of hope.

In February 2003, Lorna, a single mother and News & Politics Editor for a local arts magazine in New Paltz, N.Y., knowingly risks her life, imprisonment, and a million dollar fine by traveling to Iraq under the threat of war.

On a mission to “bring back the face of the Iraqi people” to the American public, Lorna returns with images of ordinary Iraqis she hopes will sway people against the invasion. Her controversial journey is challenged in a live television broadcast as FOX News lambastes her efforts as “villainous and bordering on treason” and accuses her of “aiding and abetting the enemy… on the brink of war.”

Deeply affected by her time spent with Iraqis, Lorna returns to an occupied Iraq intent on uncovering the untold stories. Traveling without security in local taxis, she stays in small unprotected hotels outside the safety zones where mainstream journalists are lodged. Embedding with soldiers and visiting with Iraqis in regions in and around Baghdad, including bombed-out government properties inhabited with thousands of squatters, insurgent villages, and the Shia stronghold of Sadr City, Tychostup seeks the other truths of how the war has changed Iraq.

Returning to the US after each trip with stories she believes are not reaching American TV sets, Lorna travels around the country giving lectures, presenting her slide show and appearing on innumerable media outlets. By relaying her experiences, she works to connect Americans and everyday Iraqis. Along the way she meets a range of Americans: students, soldiers, soldier’s families, and Iraqi-Americans – all of who want to understand what’s really happening beyond the national media’s coverage of the war.